As a picture is worth a thousand words, let me start with an illustration of how I see the political spectrum and where I place myself on it (click to enlarge). 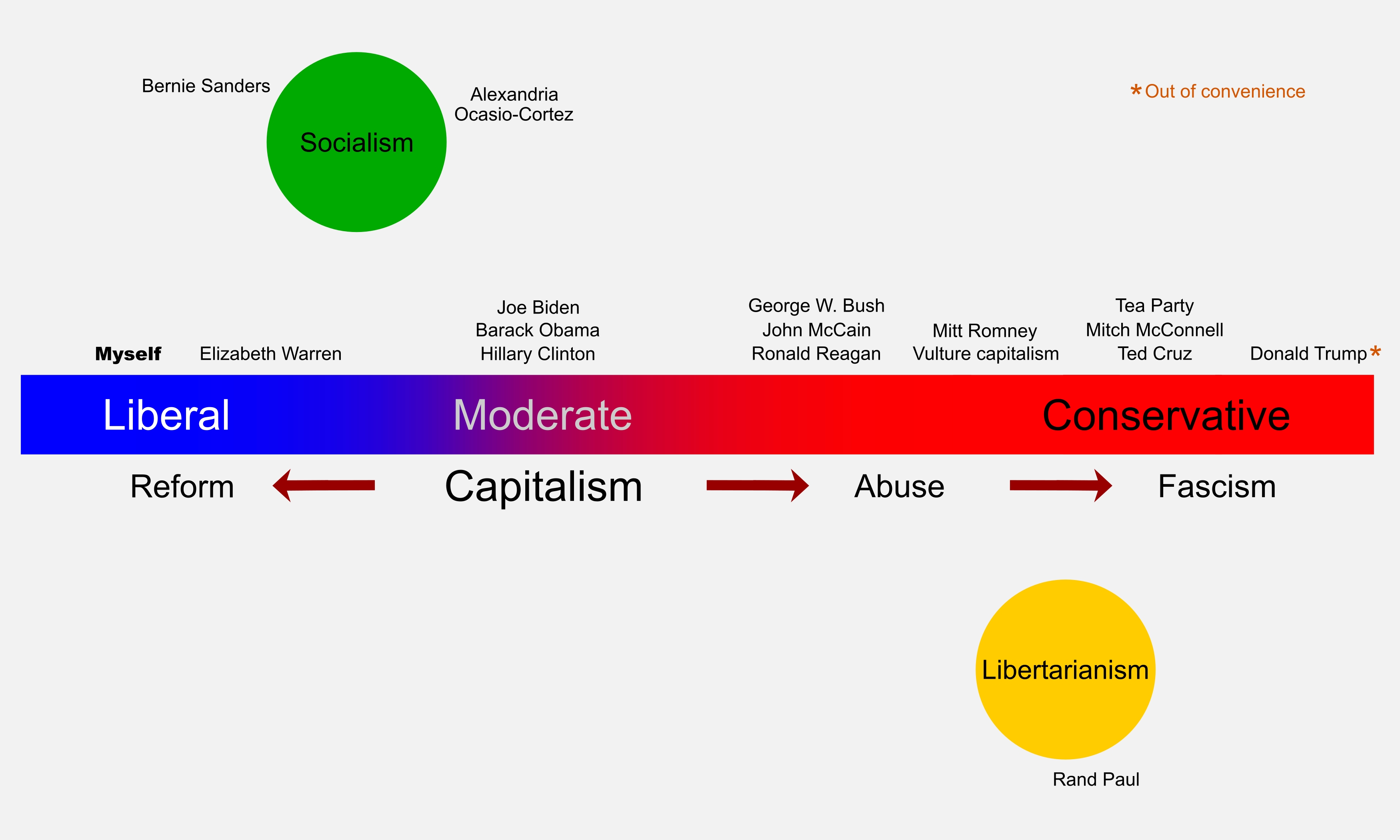 So what do you think?

Basically I think liberal Americans and the Democratic party must adopt new strategies and new attitudes to survive and compete in American politics today. The Tea Party, and later the rise of Donald Trump (which was an extension of Tea Party populism), have created a new normal that has made the old Democratic party - that is, the current Democratic party - woefully unresponsive to the challenge of a win-at-all-costs opposition.

So what is your answer?

Consistent values and a reliable point of view on the national level. My fellow liberals fall in love but have tremendous difficulty falling in line. Diversity of thought is wonderful and invaluable, and should never be discouraged in the early stages of conversation, but once an issue has moved from debate to a national agenda topic, the losing views must coalesce around the winning view for solidarity. We must be on board the winning view for the same reason. This happens by defining our values ahead of time so our diverse opinions emerge from a common understanding of who we are and what we want from government. This way we are not fighting among ourselves on major issues - say during a presidential nominating contest - because we disagree on the fundamentals. To be clear the idea is not to undermine diversity of thought, but rather to put the same vocabulary to what we know, learn and talk about so our fight is stronger.

Why does the fight need to be stronger?

Because, quite frankly, our politics has become increasingly binary. There is shrinking room for independents and moderates as more people become either liberal or conservative. And as always, unless you vote third party, your choice at the polls is binary too: Democrat or Republican. However, despite this, state and national elections still come down to which way independents swing. And in this ecosystem, their options must be equally convincing. For example: you are looking to buy a vacuum cleaner from one of two salesman and are unbiased towards either brand. One salesman knows everything about his vacuum: how it's put together, how to operate it, when you need to change the bags, etc. The other salesman smiles a lot but his knowledge is pretty superficial. He knows a little about the product but isn't terribly motivated and doesn't present a clear case for why his vacuum is better. Who would you buy from?

That's what we're dealing with here. American Politics 2.0 generally rewards clear choices and generally punishes ambiguity. This is a cultural thing too, but now it's part of our politics as well. So clarity and specificity is essential, and that can only come from a Democratic party who has communicative, consistent values. Values that reconfirm for liberals and present a clear, consistent choice for independents and moderates.

Wait, what is American Politics 2.0?

That's what I call the current hyperpartisan era of politics in which we currently live, where old expectations easily give way to new standards. The rise (and smashing success) of the Tea Party in the 2010 midterm elections was what motivated me to take an interest in politics. I remember watching initial interviews with those then-freshman Tea Party Republicans and understanding, quite quickly, that a new era was upon us. For the remainder of the Obama presidency we saw them normalize brinkmanship and inject blatant partisanship into press releases and bill titles (now standard practice among both parties). We saw them declare their intention to make Obama a "one-term president" and shutdown the government numerous times (mostly short ones) in an effort to stop Obamacare, which to date they have voted 54 times to overturn. Part of that effort ultimately included downgrading our credit rating and defaulting on our national debt. And, in the twilight of the presidency, we saw Mitch McConnell violate the Constitution by refusing to provide advice and consent to Merrick Garland, Obama's choice to replace Antonin Scalia on the Supreme Court.

This is all abhorrent, but what's more abhorrent is the reality that this attitude and behavior was not punished at the ballot box but was instead consistently, over the course of several cycles, REWARDED. Since those midterms ten years ago the Democrats have taken the House in 2018. That's it. In every other cycle Republicans have either shored up their unity, won additional seats or taken back entire chambers.

How did this happen? Well, for starters, the Tea Party played by the rules of our current culture: I'm right and you're wrong. They were specific in what they wanted, but even more specific in how they got there. They didn't beg establishment Republicans to change by protesting and marching (though they did march in the beginning). They understood enduring change must come from replacing those politicians with new lawmakers aligned with their values. And this national movement was made possible because they had shared values to begin with, and fell in line - not love - on national issues for the sake of winning elections.

My takeaway? Partisanship wins and ambiguity loses. That's the defining characteristic of American Politics 2.0. And successful partisanship comes from tight alignment on values. That's the challenge for liberals: significantly tightening our unity while still allowing for diversity of thought. What I advocate for is a period of maturity that sees that realized.

Who are you to talk about this stuff? What do you know?

Well, a few things about me. I'm a millennial. I grew up with a conservative father and a moderate-conservative mother. And I did that growing up in one of the most conservative cities in America in the 1990s (Plano, Texas). Yet I'm a liberal. I had the fortune (misfortune?) of experiencing ruby-red America intimately and coming to understand conservative values and motivations in everyday life. And I have had encouragement from a variety of friends to share my resulting, uncommon political view with others beyond my circle. There. I'm qualified.

Ok, whatever. But people who vote for Democrats still see things differently in this country. That's life. What do you hope to accomplish?

I want to start a conversation to see if I can make sense to those voters. Democratic voters do see things differently but that often comes from supporting a party that represents various things to various people: self-identified liberals, a party with traditional support from particular groups, party support passed down through the family, a "catch all" party for people who don't want to vote Republican. There are various reasons, which is why there are various Democrats, but this ultimately creates what I see as a weakness in our modern era. There must be room to take a next step, and I believe what I propose is a way (not necessarily the only way) to do that. It's a proposal to overhaul how we think about politics on the left. And it's essential if democracy is going to survive.